skip to main | skip to sidebar

The Fruits Of Madness

THE MONSTER IN MY HEAD 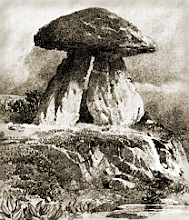 Ancient symbol of the cult found on cave walls

The reoccurring 'logo' of the blood death cult Fungus Sanguinarius. The wall carving above is by the Wadi Sori tribe found in the Libyan Desert - carbon dated c. 9000-8700BC. (thanks to anthropologist, Dr Tammy Watson for supplied image)

Police believe a cult is responsible for the mysterious disappearances of schoolchildren Melissa Quan, Andrea Bethel and Daniel Jules, all students at St Mary’s Preparatory School.

“That makes 29 of our city’s children who have disappeared within half a year! What is going on? What are the police are doing? Our children are not safe.” Melissa Quan’s father complained to this reporter.

The situation is so out of control that American law agencies have been brought in to lend their considerable expertise.

“The four St Mary’s children have now been missing for 21 days,” Detective Sergeant Ferragio commented. “We are still following up a number of leads and now suspect the involvement of a quasi-religious sect by the name of The Blooded Fungus. Needless to say we are enormously concerned as these four missing children add to the growing number of children who have been abducted within the past half year.”

Painted upon the sides of each of the nine hessian bags in red is a strange insignia appearing to be three mushrooms close together. Should anyone be able to shed further light on the insignia please contact the detectives at Camden Constabulary as this is currently their strongest clue.

A newly laid concrete floor in the room of a suburban Manila house has uncovered a mass grave of what may be up to 40 bodies. The victims were all children or elderly and are found to be either decapitated or mutilated in some way. Many body parts are missing or show signs of having been cannibalised.

The occupants of the house, three university lecturers, have been arrested and appear remarkably calm and unconcerned. They claim to be members of a cult named Fungus Sanguinarius.

“The Next has been chosen already,” one of the members said. “It is now only a matter of time. We are all patient and we all await the coming of our Dark Lord and the bringers of chaos and plague. They will purge the earth of human filth”

The occupants of the house refused to say more other than to claim not to have acted alone in these horrendous crimes. All three have since been discovered dead from heart attacks in their separate holding cells at Manila Central Police Station.

Estimated time of death was the same for all three at precisely 4.05 pm, August 4. Coroners and police remain baffled by the case especially since all three perpetrators are now deceased.

Teresa Maria Milano was approached by a man and a woman on her way back home from shopping at the local market. The 65 year old spinster was escorted down an empty side street where the man and woman proceeded to cut her arm open. They then slid what was later found to be a piece of fungus mushroom deep inside her cut arm. Ms Milano managed to escape the pair and ran into the nearest police station screaming in agony. She fainted but not before telling her strange story to the desk sergeant. Unfortunately Ms Milano died during surgery as an attempt was made to move the foreign body which had apparently spread and grown through her body at an unbelievable rate. 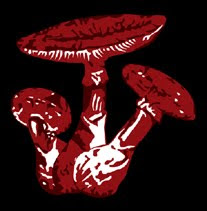 The Cavern of St Sebastien

The sign of The Blooded Fungus was found in this cave by a French expedition in 1920. Beneath it archaeologists discovered the bones of hundreds of human children dating back to pre-druidic times. 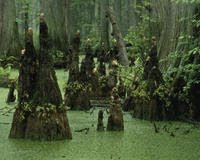 Once a meeting place for Louisiana cult members.